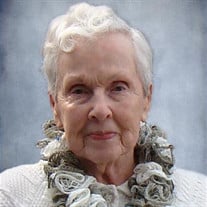 Barbara A. Reece, age 95, of Seaford, DE, passed away on Sunday, August 26, 2018 at the Methodist Manor House in Seaford, DE. She was born in Winnetka, IL, on March 31, 1923, daughter of the late Jack C. and Gertrude (Thurston) Anderson. Mrs. Reece graduated High School in 1942 from North Shore Country Day School in Winnetka, IL. She enlisted in the Navy and served as a nurse during the war years. In 1945 she married George A. Reece, a Naval aviator. In 1946 the couple settled in Wilmington Delaware where along with her role as a homemaker, Mrs. Reece volunteered at numerous community service organizations. She also pursued her interest in art, studying with several notable artists including the late Edward Loper. Her work was shown in many venues including an individual showing at Luther Towers in Wilmington. Her husband, George, passed away in 1974. In the mid 80’s Barbara built a vacation home on Broad Creek near Bethel Delaware in Sussex County and visited frequently with her friend Ed Denn. In 1990, after Ed’s death, she moved there permanently. She continued her artistic endeavors displaying her work in local shows and galleries. With a small group of fellow artists she painted several murals in buildings around Seaford. She was a past member of the Rehoboth Art League and a regular volunteer at the Lofland Park Center in Seaford where she conducted weekly art classes. Mrs. Reece moved to the independent living facility at the Methodist Manor House in Seaford in 2013. She was an active participant in Manor House activities, had many friends and continued her creative pursuits up until the last month of her life when she suffered an attack of congestive heart failure. Mrs. Reece was a kind, generous person who brought joy to everyone she knew. Her children and grandchildren will miss her loving guidance and wisdom but will always share and celebrate her bright positive spirit. In addition to her parents, and her husband George, Mrs. Reece was preceded in death by her daughter, Sharon (Reece) Kunteski in 1987; her one brother; and two sisters. She is survived by her son, Russell Reece of Laurel, DE; her daughter, Sandra (Reece) Grulich of Chesapeake City, MD; four grandchildren: Todd Reece, Christine (Reece) Cugno, Beth (Kunteski) White, and Jennifer (Kunteski) McGinnis; and five great grandchildren. All Services will be private. In lieu of flowers, memorial contributions may be made in Mrs. Reece's name to the Humane Society. Please sign Mrs. Reece's online guestbook located on this site.

Barbara A. Reece, age 95, of Seaford, DE, passed away on Sunday, August 26, 2018 at the Methodist Manor House in Seaford, DE. She was born in Winnetka, IL, on March 31, 1923, daughter of the late Jack C. and Gertrude (Thurston) Anderson. Mrs.... View Obituary & Service Information

The family of Barbara A. Reece created this Life Tributes page to make it easy to share your memories.

Send flowers to the Reece family.