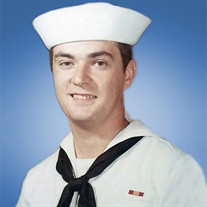 Boyd Wilson Lamkie, age 66 of Bridgeville, DE, passed away on Wednesday, November 29, 2017 at Nanticoke Memorial Hospital in Seaford, DE. He was born in Spangler, PA, on Thursday, August 23, 1951, son of Corienne (Kantz) Hileman and the late Charles Hileman. Mr. Lamkie was a graduate of Edison High School, Class of 1969 and Bryant & Stratton Business Institute, where he earned a degree in Business Administration and Computer Programming in 1972. He also attended Calhoun Marine Engineering School in Baltimore, MD, where he obtained a MEBA degree. Mr. Lamkie was a proud US Navy Veteran, having served actively for 4 years, after which he sailed for 38 years as an Engineering Officer with the Merchant Marines. In addition, he was a heavy equipment operator with Lamkie & Sons. Mr. Lamkie was a member of the Model Railroad Club in Union, NJ and Piscataway Baptist Church in Piscataway, NJ. He enjoyed reading, history, photography and classic movies. Above all, he treasured time spent with beloved family and friends. He was a loving and devoted husband, son, brother, and friend, and he will be deeply missed by all who knew him. Mr. Lamkie was preceded in death by his step-father, Albert A. Lamkie. He is survived by his wife, Thais Lumpp-Lamkie of Bridgeville, DE; his mother, Corienne Lamkie of Berkeley Heights, NJ; his brothers: Hazen Hileman of Saratoga, WY and Ellery Lamkie of Auburn, GA; his sister, Elda Reinking of Berkeley Heights, NJ; his step-brothers, Albert Lamkie of Edison, NJ and Patrick Lamkie of Schuyler, VA; and his several nieces and nephews. A Memorial Service will be held in the Spring of 2018, details of which will be announced at a later date. In lieu of flowers, the family suggests contributions in Mr. Lamkie's memory be made to: Gipsy Christian Church, 108 Trojan Road; Gipsy, PA 15741 or Nanticoke Memorial Hospital: 801 Road 535; Seaford, DE 19973. Please sign the online guestbook located on this site.

Boyd Wilson Lamkie, age 66 of Bridgeville, DE, passed away on Wednesday, November 29, 2017 at Nanticoke Memorial Hospital in Seaford, DE. He was born in Spangler, PA, on Thursday, August 23, 1951, son of Corienne (Kantz) Hileman and the late... View Obituary & Service Information

The family of Boyd Wilson Lamkie created this Life Tributes page to make it easy to share your memories.

Boyd Wilson Lamkie, age 66 of Bridgeville, DE, passed away on...

Send flowers to the Lamkie family.