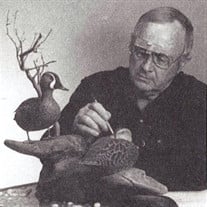 Donald Franklin Booth, Sr. age 90, of Seaford, Delaware died peacefully in his home on May 27, 2017 surrounded by two of his daughters. Donald was born in Salisbury, Maryland on January 21, 1927, son of Ethel L Johnson and Franklin T Booth. He moved to Seaford in September 1941 where his step-father, John Q Johnson was employed by DuPont. Donald attended Seaford High School where he excelled in baseball and football. During his senior year, he left school to attend The Army Specialized Training Reserve Program at the University of Delaware as a prelude to attending flight training with the Army Air Corps. Due to an abundance of surplus pilots, he was discharged and re-enlisted in the Air Corps and classified as a Tail Gunner on B-29's. Upon completion of training he was sent to Europe and then to North Africa, ending up as a crew chief on 6-17's and assigned to a special project called "Casey Jones". Receiving his commission in the Delaware National Guard he was later made Battery. Commander of H Q Battery in the 945th AAA Battalion. When he returned from service the following year, he lived in Salisbury, Maryland and worked for his brother, DeAlton Booth in the glass business. In 1949, he moved back to Seaford, Delaware and was working for Southern States and Chesapeake Airways. In March of 1950, he started his own business, "Booth Glass Company" with $350.00 which eventually expanded with branches In Salisbury and Wilmington. His business served a large area from Atlantic City, NJ to Virginia Beach, VA, and Ocean City, MD to Washington, Baltimore and West Virginia. He also began importing glass from France, Belgium, West Germany and Holland after which he started his own Trucking Company to ship glass all over the U.S. Later, he also initiated other companies including Quik-Rail that manufactured and installed aluminum railing with sales on the East Coast. In 1961, he moved his family from Woodside Manor to a farm he purchased on the corner of Rt 13 and Old Furnace Road in Seaford, DE which he named "Twin Oak Farm". He became well-known throughout the country for the breeding and showing of his Arabian Horses and Angus Cattle. Later he changed the farm name to "Heritage Farm" after a stallion that he had owned. Donald was an avid Wildfowl Carver, having won several Best of Show awards for his carvings, some of which were sold outside of the U.S. Some of his carvings are still on display at the Seaford Historical Society Museum in Seaford. Although he had numerous hobbies throughout the years, he most enjoyed his boat, airplanes, carving and painting and his animals. He was a member of St. John's Methodist Church in Seaford since 1941 and a lifetime member of the VFW Post 194 in Salisbury, MD. In addition to his parents, Donald was predeceased by his sister, Rosalyn Booth, his brother, DeAlton Booth and his granddaughter, Tracey Dobson (Phillip). He is survived by 6 children: Donald F Booth, Jr in Idaho; Robert Q Booth, (Michelle) in Seaford; Shelly B Wolfe in Seaford; Terri L Schwartz (Steve) in Georgia; Pamela Bauerlein (Mike) in Arizona; Michael Meibaum (Mali) in Lewes; his stepson David Myers of FL; 10 grandchildren, Stephen Wolfe (Laura), Trisha Newcomer (Keith), Brittany Rose (Doug), Rob Booth (Alex), Tiffany Reed (Tyler), "CJ" Jerron Faison, Savannah, Ciara and Jack Bauerlein and Ilean Meibaum; and 3 great-grandchildren: Ashleigh Wolfe, Jack and Lily Dobson. He is also survived by his two loving dogs, Dobie and Idgit. Funeral Services will be held on Friday, June 9, 2017 at 4:00 PM at St. John's United Methodist Church, 300 Pine St, Seaford, DE 19973, where friends may visit beginning at 3:00 PM. Interment will be held with full military honors on Saturday June 10, 2017 at 11:00 AM, at Parson's Cemetery, 912 N Division St, Salisbury, MD 21801. Donald's family requests that attendees wear red, white and blue in honor of their father's proud military history. In lieu of flowers, donations may be made is Donald's name to the Georgetown SPCA, at PO Box 398, Georgetown, DE 19947. Please sign Mr. Booth's online guestbook located on this site.

Donald Franklin Booth, Sr. age 90, of Seaford, Delaware died peacefully in his home on May 27, 2017 surrounded by two of his daughters. Donald was born in Salisbury, Maryland on January 21, 1927, son of Ethel L Johnson and Franklin T Booth.... View Obituary & Service Information

The family of Donald F. Booth Sr. created this Life Tributes page to make it easy to share your memories.

Send flowers to the Booth family.