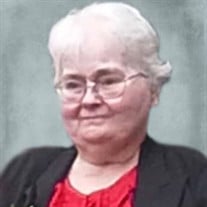 Doris Lea Jefferson, age 68 of Seaford, DE passed away on Monday, October 15, 2018at Nanticoke Memorial Hospital in Seaford. She was born on February 1, 1950, daughter of the late Leland and Mildred Meredith. Mrs. Jefferson made her career as a medical and church secretary, and worked in the hospitality industry at Nanticoke Memorial Hospital, best known as "Miss Doris," and remembered for her bright smile and her bakery skills. She enjoyed reading, sewing and baking. Doris met Ronald in 1968. Together, they created a loving and supportive family. He was her "Toot" and she was his "Duke" and "Dukey." The house was always filled with sounds of laughter, children playing, and the smell of her cooking. She taught, advised and led, and her influences will be felt by generations. She worked as the leader for Bible School for Special Persons at Christ Lutheran Church and was a member of the Sunday School teaching staff for a number of years. She enjoyed working with others and seeing the smiles that she helped create. To many, she also became a mother figure. Above all, Mrs. Jefferson cherished time spent with those she held dear. She was a loving and devoted wife, mother, grandmmother, great-grandmother, great-great grandmother and aunt. She will be deeply missed by everyone who knew her. In addition to her parents, Mrs. Jefferson was preceded in death by her sister, Joyce Elliott; her brother-in-law Robert Elliott; her nephew Scott Elliott; her brother Ken Meredith; and her daughter, Mary Houston. She is survived by her husband Ronald L. Jefferson of Seaford; her sister Phyllis Wilson (Thomas) of Seaford; her children: Ronda "Frani" Jefferson (Richard Tucker Jr.), Michael L. Jefferson (Stephanie), Roxanna "Roxie" Wingate (John Bobby), all of Seaford, Ronald L. Jefferson Jr. (Gail) and Darlene Daggett, both of Dagsboro, George Jefferson (Joyce) of Elliott Island, MD, Terry Showard of Mendon, OH, Sandra Seymore of Laurel, DE, and Steven DiSanto of Titusville, FL. She will also be sorely missed by her 31 grandchildren, 58 great-grandchildren, and 5 great-great grandchildren. A Memorial Service will be held on Saturday, October 20th, at 1:00 p.m. at Christ Lutheran Church, 315 North Shipley Street, Seaford, DE, where friend may visit beginning at 12:00 p.m. Interment will be private. FLORIST NOTE: PLEASE HAVE ALL FLORAL ARRANGEMENTS DELIVERED TO CHRIST LUTHERAN CHURCH, SEAFORD, DE BY 11 AM, SATURDAY, OCTOBER 20.

Doris Lea Jefferson, age 68 of Seaford, DE passed away on Monday, October 15, 2018at Nanticoke Memorial Hospital in Seaford. She was born on February 1, 1950, daughter of the late Leland and Mildred Meredith. Mrs. Jefferson made her career... View Obituary & Service Information

The family of Doris Lea Jefferson created this Life Tributes page to make it easy to share your memories.

Send flowers to the Jefferson family.