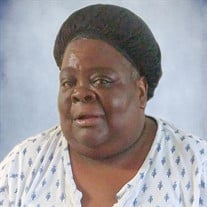 Edna Mae Collick, age 62 of Lewes, DE, passed away on Tuesday, December 5, 2017 at Beebe Healthcare. She was born in Bishopville, MD on Sunday, June 19, 1955, daughter of the late Peter Henry Croone and Bessie L. Major. Mrs. Collick attended Indian River High School and worked for years as a housekeeper in hotel hospitality, most recently at the Hampton Inn. In her spare time she enjoyed crocheting. Above all, she cherished time spent with her adored family. She was a loving and devoted wife, mother, grandmother, sister, aunt, and friend. She was loved by many and will be missed by everyone who knew her. In addition to her parents, Mrs. Collick was preceded in death by her beloved husband, Howard L. Collick, Sr., in 2005. She is survived by her daughter, Halina Collick of Millsboro, DE; her son, Howard L. Collick, Jr. of Lewes, DE; her brothers: Peter Major of Dagsboro, DE and Allen Henry of Salisbury, MD; and a host of grandchildren, nieces, nephews, in-laws, and various other family members. A Memorial Service will be announced at a later date. Please sign the online guestbook located on this site.

The family of Edna M. Collick created this Life Tributes page to make it easy to share your memories.

Send flowers to the Collick family.