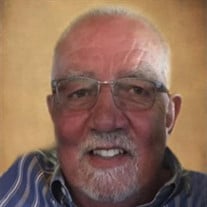 Edward “Teddy" James Johnson Jr., age 74 of Seaford, DE, passed away at home on Sunday, August 15, 2021. He was born on November 5, 1946, in Long Beach, NJ, son of the late Edward J. and Audrey (Sauer) Johnson. Ted was a graduate of Steinert High School, Class of 1964. He was a proud veteran, having honorably served in the US Navy on the USS GUAM LPH-9, from 1965 through 1969 . He built a lifelong career working at Keuffel and Esser, also known as K&E, as a sales representative for the East Coast territory, retiring after 20 dedicated years. Ted was a huge NY Giants football fan, hence, he didn't care much for the Dallas Cowboys. He enjoyed everything that coastal living had to offer, including fishing on the beach, in the bay, or on a boat, it didn't matter where, or even if he caught anything. Ted LOVED the beach, specifically LBI, NJ. He adored his 3 grandchildren who called him Pop, Pops, or Pop Pop. Ted also enjoyed building model toy cars. He went out of his way to make sure everyone was happy. Above all, Ted treasured time spent with those he held most dear. He was a loving and devoted father, grandfather, and friend who will be deeply missed by all who knew him. In addition to his parents, Ted was preceded in death by his sister, Janet Simpson. He is survived by his son, Scott Johnson; his daughter, Vanessa Howard (Jacque Pierre); his grandchildren: Samantha, Dawson, and Dane; his sister Doreen Bossert (Howard); and many friends and additional family who loved him dearly. At Ted's request, there will be no services. Shared memories are welcome on the funeral home's website. In lieu of flowers, the family suggest contributions in Ted's memory to Wounded Warrior Project, www.support.woundedwarriorproject.org/donate. Please sign the virtual guestbook located on the tribute page.

The family of Edward James Johnson Jr. created this Life Tributes page to make it easy to share your memories.

Send flowers to the Johnson family.