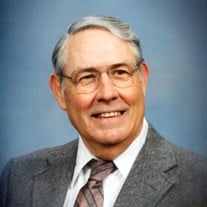 Elmer E. Hearn, age 97, passed away peacefully on Sunday, January 2, 2022, at Lofland Park in Seaford, DE, after a brief illness. He was born on August 19, 1924, at home on the family farm in Laurel, DE, son of the late Elmer W. and Cynthia L. Hearn. Elmer was the oldest living Laurel Bulldog! During his time at Laurel High School, he met and fell in love with Vera Sara Hudson. Upon graduating, however, Elmer worked for the railroad in Philadelphia, PA, continued to help out on the family farm in Laurel, and in August, 1945, joined the Army Corps of Engineers. Before shipping off to Europe to help in the rebuilding effort in Reims, France after WWII, Elmer and Vera were secretly married on January 14, 1946 (Vera was in nursing school and not allowed to wed before graduation). They spent 55 joyous years together building a home, raising a family, gardening, going to the "Silver Bullet" in Fenwick Island, and traveling throughout the United States and Europe. After a brief stint at Dupont and ten years as a manager at Southern States in Bridgeville, Elmer became a Nationwide Insurance Agent in Seaford in 1962, running his business out of the family home. Eventually, he purchased an office building in downtown Seaford and moved his office there where his son, Doug, joined him in the business. Together they loved talking to people and assisting them with their insurance needs. Elmer so enjoyed his career that he retired from Nationwide three years ago at the ripe old age of 94! Elmer loved his family, loved having an animal or two around, loved being on the water swimming or crabbing, was an avid reader, a self-proclaimed doctor , ,, and loved a good adventure and a good laugh. He was a longtime member of Mt. Olivet United Methodist Church and recently St. Johns United Methodist Church. In addition to his parents, Elmer was preceded in death by his beloved wife Vera, in 2001; his infant daughters: June, Janet and Faith Hearn; his brothers, Howard, Herman and Grover Hearn; and his sister, Florence Parsons. He is survived by his children: Penny Husted (Craig) of Wilmington, DE, Doug Hearn (Debbie) of Seaford, DE, Cindy Beard (Kevin) of Catonsville, MD, and Jon Hearn (Karen) of Bridgeville, DE; his grandchildren: Timothy Husted (Rachel), Jamie Husted (Leah) , Tyler Beard (Meghan), Kelli Beard, Sara Sharp (Dylan), and Cooper Hearn (Katelyn); and his dear friend, Annabel Cordrey of Delmar, DE. Services are private. Please sign the virtual guestbook located on the tribute page.

Elmer E. Hearn, age 97, passed away peacefully on Sunday, January 2, 2022, at Lofland Park in Seaford, DE, after a brief illness. He was born on August 19, 1924, at home on the family farm in Laurel, DE, son of the late Elmer W. and Cynthia... View Obituary & Service Information

The family of Elmer E. Hearn created this Life Tributes page to make it easy to share your memories.

Send flowers to the Hearn family.