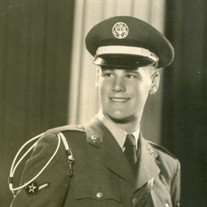 James A. Megee, III, age 86 of Millsboro, DE, passed away on Saturday, April 27, 2019, at Delaware Hospice Center in Milford. He was born on January 29, 1933 in Lewes, DE, son of the late J. Alfred and Maymie Megee. James attended Seaford High School. In 1950 he enlisted in the US Air Force. After his service to country, he worked for the Trimpers in Ocean City, MD for several years. James joined Sun Oil Company onboard Sun Company's tankers, sailing worldwide. He later joined Northwest Airlines as a ticket agent, passenger service person, and supervisor. Following those positions, James became a flight purser for NWA, flying worldwide and retiring in 1993. After retiring, James flew as a volunteer on the New England Patriots NFL Charters. He lived in Secaucus, NJ before buying a home and returning to Seaford. He has since lived in Rehoboth Beach, Lewes, and finally, in Millsboro. Above all, he cherished time spent with those he held dear. Mr. Megee was a loving and devoted brother, uncle, and friend who will be deeply missed by all who knew him. In addition to his parents, Mr. Megee was preceded in death by his brother, Robert B. Megee; his sisters: Mildred (Megee) Walls and Jeanette (Megee) Trivits; and his niece, Jeannette Walls Reale. He is survived by his nephews: James Walls, William Walls and his wife Donna, and Robert Walls and his wife Elaine; his nieces: Judith Trivits Morris and her husband Frank, Molly Ann Walls Kirby, and Toni Walls Diego and her husband Joseph, and many great-nieces and great-nephews. All services will be private. Please sign the online guestbook located on this site.

The family of James A. Megee created this Life Tributes page to make it easy to share your memories.

Send flowers to the Megee family.