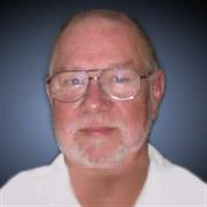 James Edwin Slack, age 74, of Seaford, DE passed away after a short illness, surrounded by his family on February 16, 2016. He was born in Lopatcong, NJ on October 20, 1941, son of the late Ethelda and Edwin Slack. He was also predeceased by a grandson, Logan Slack and a brother, David Slack. Mr. Slack and his wife Pegge moved to Seaford from Somerset County, NJ in 2003. He was a veteran of the Marine Corp and was a life member of the VFW Post 4961 of Seaford, DE where he was an Officer for many years; was a member of the American Legion Post 6 of Seaford, DE; was formerly in charge of the color guard for the VFW, and was a member of the Marine Corp League. In addition on every Thursday for nine years Mr. Slack went to Panera in Salisbury, MD to pick up donations which he then delivered to various veterans’ homes as well as the American Legion for veterans to enjoy. He was an avid golfer and loved his NY Giants, even though they usually disappointed him on game day, but he never gave up. However, his most enjoyment was getting to make trips to New Jersey with his wife to see their grandchildren and children. Surviving is his step mother, Mary Slack of CO; his wife of 52 years Margaret “Pegge” Slack; his son, Michael of AZ; two daughters: Michelle Berry of PA and Tamiko Hanson of Phillipsburg NJ. He is also survived by 13 grandchildren and 4 1/2 great-grandchildren; three brothers: Tom Slack of Bound Brook, NJ, Jody Slack of CO and Ken Slack of AZ and a sister, Julie Zimmerman of CO. Memorial Services will be held on Sunday, February 28, at 1:00 PM, the VFW, 9767 Middleford Road, Seaford, DE, where friends may gather following the service until 4:00 PM. We will gather to celebrate his life not his passing, bring your smiles and laughter and any stories you may want to share. In lieu of flowers, memorial contributions may be made in Mr. Slack's memory to the VFW, 9767 Middleford Road, Seaford, DE 19973. Arrangements by Watson-Yates Funeral Home, a Division of the Parsell Family Funeral Home. Please sign the guestbook located on this site. FLORIST NOTE: PLEASE HAVE ALL FLORAL ARRANGEMENTS DELIVERED BY 12:00 PM ON SUNDAY, FEBRUARY 28, 2016 TO VFW, SEAFORD, DE.

James Edwin Slack, age 74, of Seaford, DE passed away after a short illness, surrounded by his family on February 16, 2016. He was born in Lopatcong, NJ on October 20, 1941, son of the late Ethelda and Edwin Slack. He was also predeceased... View Obituary & Service Information

The family of James Edwin Slack created this Life Tributes page to make it easy to share your memories.

James Edwin Slack, age 74, of Seaford, DE passed away after a...

Send flowers to the Slack family.