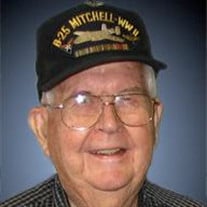 John David Kroening, age 93, of Seaford DE, passed away on Tuesday, December 13, 2016, at the Delaware Veterans Home in Milford, DE. He was born in Baltimore, MD, on Wednesday, June 6, 1923, son of the late John Kroening and Laura Bliss Fairley. Mr. Kroening proudly served in the United States Army Air Corps during World War II as part of the 12th Air Force, 57th Bomb Wing, 340th Bombardment Group and the 488th Squadron . His boyhood love of airplanes drove him to become a B-25 pilot, earning his "wings" in 1944. On August 23, 1944, John flew a B-25 bomber across the Atlantic to Africa to fly missions out of Corsica, off the coast of Italy. That same day, he flew his first bombing mission to the Settimo Road Bridge, Italy. In total, John flew 65 combat missions, earning an Air Medal (the first of 8) for his very first mission. He was also awarded with The Distinguished Flying Cross, earned by those who distinguish themselves in "heroism or extraordinary achievement while participating in an aerial flight". John had an ability of always returning his crews back to base safely, making him a very popular pilot with whom to fly. First Lieutenant Kroening finished his combat tour in March of 1945. He declined the Army's offer to make him Captain. After retiring to Milford, DE, Mr. Kroening together with his daughter, Leslie, wrote a book; "Flyboy: A Teenager's Fast Track to becoming a WWII Combat Pilot". Mr. Kroening is survived by his daughter, Leslie Bridgett, of Pasadena, MD and his sister, Laura Ripple of Baltimore, MD. Interment will be private at Delaware Veterans Cemetery in Millsboro, DE. Please sign Mr. Kroening's online guestbook located on this site.

John David Kroening, age 93, of Seaford DE, passed away on Tuesday, December 13, 2016, at the Delaware Veterans Home in Milford, DE. He was born in Baltimore, MD, on Wednesday, June 6, 1923, son of the late John Kroening and Laura Bliss Fairley.... View Obituary & Service Information

The family of John David Kroening created this Life Tributes page to make it easy to share your memories.

Send flowers to the Kroening family.