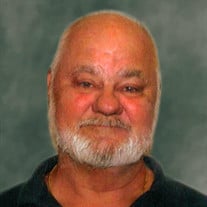 John H. Tolodziecki Jr., age 70, of Seaford, DE, passed away suddenly on Monday, October 23, 2017 at Nanticoke Memorial Hospital. He was born in Baltimore City, MD, on November 15, 1946, son of the late John H., Sr. and Vilolet R (Johnson) Tolodziecki. Mr. Tolodziecki served 8 years in the Merchant Marines and then joined the United States Marine Corps and was a veteran in the Vietnam War. He worked for Motorola as a Tech and then for Wireless Communications from which he retired. Mr. Tolodziecki was a member of the Seaford Elks Club, the Seaford Moose Lodge, the American Legion and the Seaford Senior Center. He was a Lifetime Member of the VFW as well. Mr. Tolodziecki had a passion for motorcycles and was a member of the American Legion Riders group and the Praising Thunder Motorcycle Club in Maryland. In his spare time he also enjoyed fishing and hunting. In addition to his parents, Mr. Tolodziecki was preceded in death by his step son, Norval Buck and his brother, Matt Tolodziecki. He is survived by his loving wife, Mildred (Buck) Tolodziecki of Seaford, DE; his step sons, Bobby Buck of Glen Burnie, MD and Steve Buck of Salem, CT; and his uncle, Art League and his wife Joan of Laurel, DE. Funeral Services will be held on Monday, October30, 2017 at 12:00 PM at Watson-Yates Funeral Home & Crematorium, A Parsell Family Funeral Home, 609 East King Street, Seaford, DE 19973, where friends may call beginning at 11:00 AM. Burial will follow services at 2:00 PM, at Eastern Shore Veterans Cemetery, 6827 E New Market Ellwood Road, Hurlock, MD. Following Services, the Elks Lodge will hold a lite fair reception in Mr. Tolodziecki's honor. Please sign Mr. Tolodziecki's online guestbook located on this site. FLORIST NOTE: PLEASE HAVE ALL FLORAL ARRANGEMENTS DELIVERED BY 9 AM, MONDAY, OCTOBER 30, 2017 TO WATSON-YATES FUNERAL HOME, SEAFORD, DE.

The family of John H. Tolodziecki Jr. created this Life Tributes page to make it easy to share your memories.

Send flowers to the Tolodziecki family.