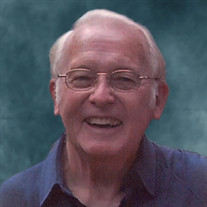 Dr. Lilburn L. Norton passed away on December 4, 2016 just shy of his 90th birthday. He was born to William Clyde and Eula Tate Norton on January 2,1927 in Tennessee. The valuable lessons and discipline he learned growing up on a farm during the depression carried through every aspect of his life. He was Valedictorian of his High School and served as an aviation machinist for the United States Navy during World War II. Afterwards, he earned a Bachelor of Science from Carson-Newman College, a Master of Science from Northwestern University, and a Doctor of Philosophy from the University of Tennessee in the challenging discipline of Organic Chemistry. He had a life-long career with E.l. du Pont de Nemours and Company in Chattanooga, TN (1954 -1959) and Seaford, DE (1959 to 1991) steadily rising from Research Chemist to Research Fellow. He retired in 1991. He accepted Jesus Christ as his personal Lord and Savior as a young teen, and credited his life's achievements to this relationship. His passion for reaching souls for Christ and for his church family at Grace Baptist Church in Seaford, DE was evident and remained steadfast throughout the years. He served in multiple leadership roles and was instrumental in many expansion projects as well as daily maintenance of the church facility. His contributions there will traverse time. Lilburn's hobbies were working hard, helping others, and fixing anything that was broken. He enjoyed ballroom dancing and Community Concerts. He had a life-long love of learning. He is survived by his wife Barbara Wilson Norton, sons Michael (Sherry) and Gary (Gladys) Norton, daughters Nancy (Bob) Sheffey and Lee (Russell) Carrow and stepson William (Linda) Weber, Jr. He was blessed with numerous grandchildren and great grandchildren. Lilburn was predeceased by his first wife, Wilma Parrish Norton, his second wife, Barbara Hill Weber Norton, and stepson Robert Weber. A Celebration of Life Service will be held at 11:00 AM on Monday December 12, 2016, at Grace Baptist Church, 805 Atlanta Road, Seaford, DE. where friends may visit one hour prior to services. Burial will follow at Odd Fellows Cemetery, Seaford, DE. In lieu of flowers, the family respectfully suggests a donation be made in memory of Lil to the Alzheimer's Assn. Delaware Valley Chapter, 399 Market Street, Suite 102, Philadelphia, PA 19106 or to the Grace Baptist Church, 805 Atlanta Road, Seaford, DE 19973 The family would like to express their sincere gratitude to the faithful and caring staff of Country Rest Home in Greenwood, DE and Seasons Hospice in Milford, DE. Please sign the online guestbook for Mr. Norton at this site.

Dr. Lilburn L. Norton passed away on December 4, 2016 just shy of his 90th birthday. He was born to William Clyde and Eula Tate Norton on January 2,1927 in Tennessee. The valuable lessons and discipline he learned growing up on a farm during... View Obituary & Service Information

The family of Lilburn L. Norton created this Life Tributes page to make it easy to share your memories.

Send flowers to the Norton family.