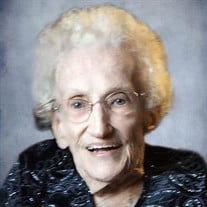 Marguerite E. Steele, age 102, of Seaford, DE passed away on Friday, June 17, 2016 at the Seaford Center Nursing Home. She was born in Philadelphia, PA on December 31, 1913, daughter of the late Charles Fuller Matthews and Mary T. Pruitt Matthews. Mrs. Steele was married to Robert W. Steele for 40 years. Together they traveled to every Country. She worked several years for the DuPont Company in Wilmington while Robert was in the army. He passed away in 1972. She later married Bruce W. Davis with who she traveled to every state in the United Stated and Canada. They also enjoyed traveling to the Caribean. Mrs. Steele was a member of St. John's United Methodist Church in Seaford, DE. Her other memberships included the Acorn Club, AARP, the Widows Association , Nanticoke Memorial Hospital Ladies Auxillary and the Order of the Eastern Star Chapter 7 where she was Past Matron. Mrs. Steele enjoyed traveling, knitting, reading and needle point. Mrs. Steele was preceded in death by her husband Robert William Steele, Sr. in 1973 and her second husband Bruce Davis in 2001 and her brother, Charles F. Matthews, Sr. She is survived by several cousins, nieces and nephews and two sisters in law. Funeral Service will be held on Tuesday, June 21, 2016 at 10:00 AM at St. John's United Methodist Church, 300 North Pine Street, Seaford, DE, where friends may call beginning at 9:00 AM until 9:50 AM. An Eastern Star Service will start at 9:50 AM. Interment will be private. Please sign Mrs. Steele's online guestbook located on this site. FLORIST NOTE: PLEASE HAVE ALL FLORAL ARRANGEMENTS DELIVERED BY 10:00 AM ON TUESDAY, JUNE 21, 2016 TO WATSON-YATES FUNERAL HOME, SEAFORD, DE.

The family of Marguerite Evelyn Steele created this Life Tributes page to make it easy to share your memories.

Send flowers to the Steele family.