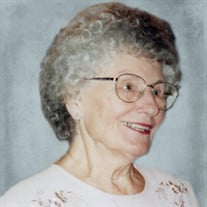 Maxine S. Romer of Seaford, Delaware, died peacefully at home surrounded by her family on December 13 at age 94. She was born in Robersonville, NC, on June 13, 1925 and graduated from Robersonville High School. She moved to Washington, DC, in June 1943 where she was employed by Woodward and Lothrop Department Store. Maxine was employed with the Federal Highway Administration for 35 years. She was married to her beloved husband of 66 years, Edward Allen Romer, October 30, 1953. They resided in Mitchellville, Maryland before relocating to Seaford, Delaware in 1997. She was the daughter of the late Elie and Kathleen Roberson Stevenson of Robersonville, NC. She was proceeded in death by her sisters, LaRue Day, Louise Atwell, Faye Williams, and brother, William Stevenson. She is survived by her husband, Edward and children, John Phillip Romer (Wanita) and Robin Marie Walsh (Joseph). Her many grandchildren include: Jason (Jaime), John (Amanda), Allen (Shelby), Paul (Katie), Jillian Wolf and Joseph E. Walsh, III. Her great grandchildren include: Jenna, Janelle, Adler, Charlotte, Kinsley, Kaden, and Amelia. Maxine is also survived by her siblings: Shirley Whitehurst and Ellis Stevenson. Maxine enjoyed her family, friends and never knew a stranger. She was a warm and loving person to all who knew her. She was devoted wife, mother, and mother-in-law, grand and great grandmother. Maxine enjoyed sewing and was an excellent seamstress. Funeral services will held on Thursday, December 19, 2019 at 11:00 AM at Watson-Yates Funeral Home, a Parsell Family Funeral Home, 609 East King Street, Seaford, DE 19973, where friends may call beginning at 10:00 AM. Burial will follow services at Galestown Cemetery, Galestown, Maryland. In lieu of flowers, memorial contributions in Mrs. Romer’s memory may be made to Delaware Hospice, 100 Patriots Way, Milford, DE 19963. Please sign Mrs. Romer's online guestbook located on this site.

Maxine S. Romer of Seaford, Delaware, died peacefully at home surrounded by her family on December 13 at age 94. She was born in Robersonville, NC, on June 13, 1925 and graduated from Robersonville High School. She moved to Washington, DC,... View Obituary & Service Information

The family of Maxine S. Romer created this Life Tributes page to make it easy to share your memories.

Send flowers to the Romer family.