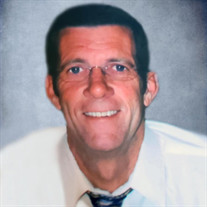 Michael Edward Patterson, age 58 of Seaford, DE, passed away on Tuesday, April 28, 2020, surrounded by his family at his home, after a long battle with COPD and lung cancer. He was born on Flag Day, June 14, 1961 in Seaford, DE, son of Ben and Janie Patterson. Every year, he would tell friends that all the flags had been hung for him. Mike was a proud veteran, joining the US Army after high school graduation, and serving in the National Guard for 6 years. Upon returning to Seaford, he worked at Methodist Manor House, where he met the love of his life, Becky. Mike went on to work for Manlove Automotive for several years, eventually becoming the warehouse manager. Planning for the future, he took a position with his hometown, the City of Seaford, and received his wastewater operator certification. Mike was proud of his hometown status and retired from Parks and Recreation after 19 dedicated years of service to the city. Kind and giving to all who knew him, Mike will be remembered as one of the good ones. He loved the beach, NASCAR, the Washington Redskins, his motorcycles, and being captain of his own pontoon boat. He was a member of the Seaford Volunteer Fire Department and Union United Methodist Church. Above all, Mike cherished time spent with those he held most dear. He was a loving and devoted husband, son, father, grandfather, brother, uncle, and friend. He was loved by many and will be deeply missed by all who knew him. Mike was preceded in death by his sister, whom he adored, Robin; and his grandparents: Edward and Rachel Hudson and Charles and Mattie Patterson. In addition to his parents, he is survived by his beloved wife of 35 years, Becky Patterson; his daughters: Stacey and Angie (Bobby James); his grandchildren: Drake and Bailey and a new grandson due in July; his mother-in-law, Margaret Sipple; his brother-in-law, Mike Sipple (Patti); his nieces: Kelly and Lauren; and a host of aunts, uncles, cousins, and friends. In lieu of flowers, teh family requests contributions in Mike's memory to the Richard A. Henson Cancer Institute/Peninsula Regional Health System, 106 East Carroll Street, Salisbury, MD 21601, or Vitas Healthcare, 30265 Commerce Drive, Suite 202/203, Millsboro, DE 19966. Please sign the online guestbook located on the tribute page.

Michael Edward Patterson, age 58 of Seaford, DE, passed away on Tuesday, April 28, 2020, surrounded by his family at his home, after a long battle with COPD and lung cancer. He was born on Flag Day, June 14, 1961 in Seaford, DE, son of Ben... View Obituary & Service Information

The family of Michael Edward Patterson created this Life Tributes page to make it easy to share your memories.

Send flowers to the Patterson family.