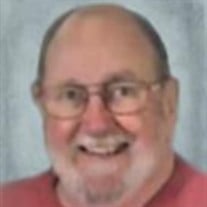 Richard Bryan Hall, age 82 of Seaford, DE passed away at home on Saturday, May 28, 2022, surrounded by his children and many of his grandchildren. Beloved husband of Nancy (nee Lane); devoted father of Sonja Mehaffey of Seaford, DE, Kristen Hall Doddo of Dickson, Tennessee, David Hall of Green Bay, Wisconsin, and Kara Hall of Norfolk, VA. He was predeceased by a son James Adams and is also survived by many loving grandchildren, two of whom reside in Seaford, DE: Rocky Mehaffey and Amy Adams Dalton. Born in Camden, NJ, he was the son of John James Hall and Marguerite "Peg" Carlin. He was the youngest of five children. He is predeceased by his parents and two sisters, "Honey" and "Tinker" and his oldest brother Jack. He is survived by his brother, William "Bill" Hall of Marlton, NJ, and many beloved nieces and nephews. He graduated from Merchantville High School in 1957 and enlisted in the Navy. He served on the USS Noah (DD-841) as a radioman and was honored to have transmitted the radio call on February 20, 1962, to President Kennedy from Fleet Command on the recovery of Commander John Glen and his spacecraft Friendship 7. He later served on the USS Jonas Ingram (DD-938) and enjoyed talking about "becoming a Shellback when he crossed the Equator". After his service in the Navy, he returned to New Jersey and became employed in the finance and home building industry, working for First Pennsylvania Bank in mortgage financing and later for Levitt & Sons and the Korman Corporation. In 1972 he decided to leave the homebuilding industry and return to college to pursue studies in the environmental field. He graduated from Richard Stockton University, then known as Stockton State College with a BS degree in Environmental Science. He became a Wildlife Biologist with NJ Division of Fish and Game & Wildlife where he worked for the rest of his career. He was a Certified Wildlife Biologist. Upon his retirement in 2000, he was the Regional Superintendent of South Jersey Land Management - Wildlife Management Areas. In 2001, he and his wife, Nancy, moved from their homes in Upper Deerfield, NJ and Wildwood Crest, NJ to Seaford, Delaware to be closer to the "kids". He enjoyed his black labs, tending to his Christmas tree farm, sailing on the Chesapeake, traveling and fine dining, birding, and visiting historic places, wildlife refuges and state parks. He was an avid reader and enjoyed his daily crossword puzzles, and, of course, watching "Jeopardy". The family would like to thank the nurses of the 1st floor of TidalHealth, Nanticoke for their care and compassion and also, Compassionate Care Hospice for their outstanding care of Richard in his final days. Services will be private. In lieu of flowers, the family suggests donations in Mr. Hall's memory to Ducks Unlimited, https://www.ducks.org/sup, or The Nature Conservancy, https://secure.wcs.org/.

Richard Bryan Hall, age 82 of Seaford, DE passed away at home on Saturday, May 28, 2022, surrounded by his children and many of his grandchildren. Beloved husband of Nancy (nee Lane); devoted father of Sonja Mehaffey of Seaford, DE, Kristen... View Obituary & Service Information

The family of Richard Bryan Hall created this Life Tributes page to make it easy to share your memories.

Send flowers to the Hall family.