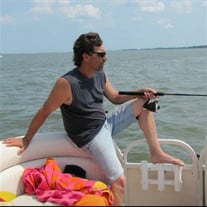 Roger Lee Greely, age 53, was called to heaven on Thursday, September 27, 2018, when he passed away at his home in Georgetown, DE. Roger was a proud US Navy Veteran who served as a Radioman and Master-at-Arms from 1983-1989 and was a member of the American Legion Post 28. He owned and operated many businesses including Southeastern Plastics, Taylor Haus Restaurant, No Limit Services, and Blue Claw Maintenance, as well as being employed at West Bay Park and Homestead Campground. Roger loved his family, Coors Light, and the outdoors, especially being on the water crabbing and blue marlin fishing. He enjoyed writing songs and over the years shared many with Tanner Mountain Band. He was loved by so many and will be so missed by all who knew him. Roger was a loving and devoted husband and soulmate to his wife of 31 years, Diane (Schmidt) Greely; father to daughter Courtney Greely and son, Lee Greely (Ashley) and grandfather to Ava Leigh (“Little AL”); loving son to Catherine Joy and the late Howard (Sonny) Greely; step-son of the late Robert Joy Sr.; dear brother of Lynn Snook (Craig); the late Thomas Greely, Robert Joy, Jr. (Lori); and Robin Key; loving uncle to Matthew Snook (Megan); Justin Snook (Kaitlin); Robert L. Joy, Brittany Fraser (Shane); Joseph Greely (Cara); Brandon Greely; Jesse Greely; Erin Key and Megan Key. He also enjoyed special times with his grandnieces and nephew. A Memorial service will be held on Saturday, October 6, 2018 at 5:00 PM, at Hartenstein Funeral and Cremation Care, Inc., 19 South Main Street, Stewartstown, PA 17363, where friends may visit beginning at 3:00 PM. There will also be a celebration of life gathering on Tuesday October 9, 2018 from 5:00PM to 8:00 PM at the American Legion Post 28, 31768 Legion Road, Millsboro, DE 19966. In lieu of flowers, the family requests that any memorial contributions be made to the Courtney J. Greely Trust Fund, PO Box 331, Nassau, DE 19969. Please sign the online guestbook located on this site.

Roger Lee Greely, age 53, was called to heaven on Thursday, September 27, 2018, when he passed away at his home in Georgetown, DE. Roger was a proud US Navy Veteran who served as a Radioman and Master-at-Arms from 1983-1989 and was a member... View Obituary & Service Information

The family of Roger L. Greely created this Life Tributes page to make it easy to share your memories.

Send flowers to the Greely family.