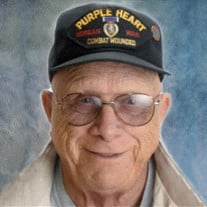 Roy T. Joseph, age 84, of Seaford, DE, passed away on Friday, June 10, 2016 at Delaware Hospice Center, Milford, DE. He was born and raised in Laurel, DE, son of the late Norman Joseph and Blanche (Whaley) Joseph. Mr. Joseph proudly served in the U.S. Army during the Korean War where he received a Purple Heart. Upon discharge from the Army, he began delivering produce along the east coast for his father-in-law. Then he was a warehouse manager at Miller's Furniture in Seaford for 27 years, from which he retired. When able, he also worked in his son’s store in Seaford, AJ’s Sporting Goods. Mr. Joseph was a member of the American Legion Nanticoke Post 6 and the Virgil Wilson Post 4961 VFW in Seaford. He volunteered driving the DAV van for the Disabled American Veterans. In his spare time, he liked to go camping at the beach where he enjoyed fishing and people watching. He also liked woodworking and carpentry around his house. He was a jokester and you never knew what was going to come out of his mouth next. He was a loving husband, father, grandfather, great-grandfather, brother and friend who will be missed by all who knew him. Mr. Joseph was preceded in death by his loving wife, Margaret (Lloyd) Joseph, his son, Alan L. Joseph and his four brothers, Ralph, Jimmy, Ronald, and Burton Joseph. He is survived by his daughter-in-law, Anna S. Joseph, of Bridgeville, DE; three grandchildren: Amber Bataille and her husband, Roy of Farmington, DE, Amie Roedersheimer and her husband, Andrew, of Bear, DE and Alex Joseph and his companion, Rachel Mitchell, of Bridgeville, DE; two great-grandchildren: Carter Joseph and Evan Roedersheimer, as well as two more on the way; and his sister, Kathleen Hearn, of Seaford, DE. Memorial Services will be held on Friday, June 17, 2016, at 11:00 AM, at Watson-Yates Funeral Home, Front & Kings Streets, Seaford, DE, where friends may visit one hour prior to services. Interment will follow services at Odd Fellows Cemetery, Seaford, DE. Memorial contributions may be made to Delaware Hospice, 100 Patriots Way, Milford, DE 19963. Please sign Mr. Joseph's online guestbook located on this site. FLORSIT NOTE: PLEASE HAVE ALL FLORAL ARRANGEMENTS DELIVERED BY 3PM, THURSDAY, JUNE 16, 2016 TO WATSON YATES FUNERAL HOME, SEAFORD, DE.

The family of Roy T. Joseph created this Life Tributes page to make it easy to share your memories.

Send flowers to the Joseph family.