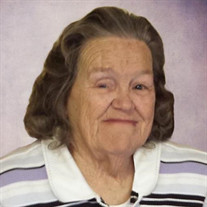 Shirley Anne Meredith Johnson, age 72, of Seaford , DE, went to be with her Lord and Savior on Friday, February 12, 2016 at Thomas Jefferson University Hospital in Philadelphia, PA. She was surrounded by her family. Shirley was born on January 7, 1944 in Federalsburg, MD, she was the oldest daughter of the late Russell and Anna Mae Clevenger Meredith. Shirley retired from the State of Delaware Department of Corrections as a Records Clerk. She was a past Girl Scout Leader and past member of the American Legion Post #19 Ladies Auxiliary where she held many office positions. Shirley was an active member of the Women of the Moose at Loyal Order Moose Lodge #1728 in Seaford. She was also an active member of the Woodland United Methodist Church where she held many office positions throughout the years. Shirley was an Adult Sunday School Teacher until her passing. In addition to her parents, Shirley was preceded in death by her brother, Johnny Meredith and brother-in-law, Dennis Tull. She is survived by her loving husband of 49 years, Jack Johnson, two children: Brian and Tambrey both of Seaford, DE; five grandchildren: Zachary, Samantha, Bridget, Kayla and Maxwell; a sister, Pamela Tull-Baynum and her husband Jim; and several in-laws, nieces and nephews. Funeral Services will be held on Thursday, February 18, 2016, at 11:00 AM, at Woodland United Methodist Church, 5123 Woodland Church Road, Seaford, DE 19973, where friends may call beginning at 10:00 AM. Burial will follow services at the Delaware Veterans Memorial Cemetery, 26669 Patriots Way, Millsboro, DE. Friends may also visit at the church on Wednesday, February 17, 2016 from 6:00 to 8:00 PM. Memorial contributions may be made in Shirley's memory to Woodland United Methodist Church in care of Suzanne Haught at the above address. Arrangements by Watson-Yates Funeral Home, a Division of the Parsell Family Funeral Home. Please sign the guestbook located on this site. FLORIST NOTE: PLEASE DELIVER ALL FLORAL ARRANGEMENTS BY 2:00 PM OR 3:30 PM ON WEDNESDAY, FEBRUARY 17, 2016 TO WATSON-YATES FUNERAL HOME, SEAFORD, DE.

Shirley Anne Meredith Johnson, age 72, of Seaford , DE, went to be with her Lord and Savior on Friday, February 12, 2016 at Thomas Jefferson University Hospital in Philadelphia, PA. She was surrounded by her family. Shirley was born on January... View Obituary & Service Information

The family of Shirley A. Johnson created this Life Tributes page to make it easy to share your memories.

Send flowers to the Johnson family.