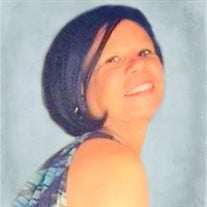 FLORIST NOTE: PLEASE DELIVER ALL ARRANGEMENTS BY 3PM FRIDAY, SEPTEMBER 20, 2019 TO WATSON-YATES FUNERAL HOME. Thelma A. Reed, age 52 of Georgetown, DE, made her heavenly departure on Monday, September 9, 2019, to be in the presence of the Lord in Paradise. She was born on February 13, 1967 in Wilmington, DE, daughter of the late Amos and Mildred Carter. Thelma received her education at George Gray Elementary School, P.S. DuPont Middle School, and attended Mount Pleasant High School. She also attended Delaware Technical & Community College, where she earned her GED. Thelma obtained a Lead Abatement Certification and worked at many companies including: Walmart, Perdue Farms, and Resort Quest. She enjoyed cooking, fishing, and crabbing, as well as going out on the boat or pier with her husband, Ralph. Thelma loved to sing, her favorite songs being "I Won't Complain" and "Precious Lord", and she took great joy in being on the praise and worship team. She was an avid traveler - Florida being among her favorite places to visit. Thelma was the consummate hostess at all kinds of gatherings and events; she had a unique way of making everyone feel welcome and at home. Above all, she cherished time spent with those she held most dear. Thelma was a loving, devoted, and dedicated wife, mother, grandmother, sister, aunt, and friend. She was loved by many and will be deeply missed by all who knew her. In addition to her parents, Thelma was preceded in death by her Godparents: Hezekiah Burton and Sally Ann (Mrs. Ann) Burton. She leaves to cherish her memory her beloved husband of 23 years, Ralph Reed; her daughters: Tierra Carter and Tenika Benjamin; her son, Semeion Reed; her stepchildren: Ivy, Ralph Reed Jr., Tiwanda, Shannies, Eudora, Deline, Roberta, Robert, Jerry, Dorzet, and Deshawn; her grandchildren: Tyair Cannon, Teniyah Benjamin, Adrian Gibbs, Jr., David Willis, Jr., and a granddaughter on the way; her brother, Larry Poteat; her sisters: Nancy Benjamin, Shirley Carter; her nephews and nieces: Arthur Gatewood, Shamba Carter, Brandon Benjamin, Tanei Benjamin, Sade Fields, and Shenee Miles; her dear friend who was like a sister to her, Deborah Frisby; and a host of in-laws, family, and friends. A Funeral Service will be held on Saturday, September 21, 2019 at 12:00 PM at the Refuge Temple Revival Center, 455 North Front Street, Seaford, DE, where friends may call beginning at 10:00 AM. Interment will be private. Please sign the online guestbook located on the tribute page.

FLORIST NOTE: PLEASE DELIVER ALL ARRANGEMENTS BY 3PM FRIDAY, SEPTEMBER 20, 2019 TO WATSON-YATES FUNERAL HOME. Thelma A. Reed, age 52 of Georgetown, DE, made her heavenly departure on Monday, September 9, 2019, to be in the presence of the Lord... View Obituary & Service Information

The family of Thelma A. Reed created this Life Tributes page to make it easy to share your memories.

Send flowers to the Reed family.