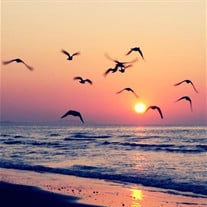 Vincent J. Bonowicz, age 75 of Laurel, DE passed away on Wednesday, January 18, 2017 at Peninsula Regional Medical Center. He was born on September 17, 1941 in Jersey City, NJ, son of the late Vincent and Mae (Wisniewska) Bonowicz. Mr. Bonowicz had a lifelong career on the railroad, retiring as a conductor for NJ Transit Rail, before relocating to southern Delaware. He was an avid fisherman and enjoyed gardening. More than anything, however, he cherished time spent with the family he loved. He was a caring and devoted husband, father, brother, and friend, and he will be deeply missed by everyone who knew him. In addition to his parents, Mr. Bonowicz was preceded in death by his beloved wife, Gladys Bonowicz in 2012. He is survived by his sons: Jason Bonowicz and his wife Chrystal, and Paul Bonowicz and his wife Lisa; his daughter, Sharon Bonowicz; and his brother, John Bonowicz. A Graveside Service will be held at 10:00 AM on Friday, January 27, 2017 at Holy Cross Cemetery, 340 Ridge Road, North Arlington, NJ 07031. In lieu of flowers, the family suggests contributions in Mr. Bonowicz's memory to the MRSA Foundation, P.O. Box 61744, Irvine, California 92602. Please sign Mr. Bonowicz's online guestbook located on this site.

The family of Vincent Joseph Bonowicz created this Life Tributes page to make it easy to share your memories.

Send flowers to the Bonowicz family.